First, the participants, their wives and their carers were greeted by the owner of the host firm. Following a lecture by the lawyer Maite Garasa of the study “Bufete Conesa Asociados” on “The commercial settlement in Spain through agency contracts”.

Subsequently the companions left the studio to carry out the program prepared for them, consisting of a visit to the Museum of Modernism in Barcelona, ​​as an anticipation of the visit scheduled for the day following the Sagrada Familia.

Once the Assembly began, the lawyer José Conesa with office in Barcelona was elected as President for the 2013-2014 period, and the meeting continued. In addition to the outgoing president Valdemar Gonçalves and the new president José Conesa the members of ELEN were present, the lawyer Vincenzo M. Carena of the firm “Studio Avvocato Carena” of Turin, the lawyer Jean Jacques Duflos of “Duflos & Cartigny Associes” of Lyon and also the lawyer José Floriano Monteiro Saad of the “Saad Advocacia” law firm in Brazil, ELEN’s collaborating law firm.

The main agreements reached during the meeting were the approval of the previous minutes, the balance sheet of the implementation of ELEN and its associates during the last year, the adaptation of the web page and, as one of the objectives, was assigned to each member a country in which to select a law firm to associate with ELEN.

It was decided to hold the intermediate meeting of the Directors in March 2014, in Cervinia (Italy), with organization organized by the lawyer Vincenzo M. Carena.

Finally, the offices of Secretary and Treasurer, respectively, were assigned to the law firms of Turin and Barcelona.

The following day a French guided tour of the Sagrada Familia was held to conclude with a convivial and farewell lunch. In addition to members and collaborators with their carers, the lawyer Julio Silvio Cerquetani from Brazil, invited by the lawyer José Saad, and the lawyer Pascal Junod from Geneva who collaborated with Valdemar Gonçalves, who invited him to introduce him to our legal network.

The next Assembly will take place in Lyon, organized by the firm “Duflos & Cartigny Associes ”. 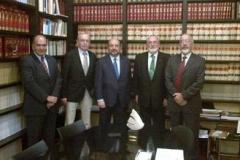